Marriages are Made in Bond Street 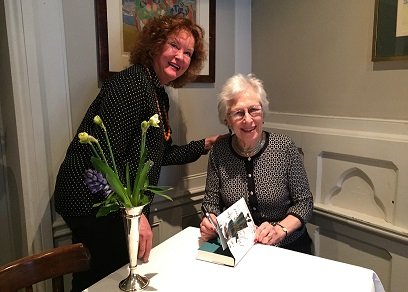 I recently had the great pleasure of lunching with Penrose Halson, the author of this just-published and fascinating book.  I’ve known Penrose for many years as a colleague in the matchmaking world. That’s the two of us in the photo above, and Penrose is signing a copy of the book that she very kindly gave me.

You absolutely have to get ‘Marriages are Made in Bond Street’ published by MacMillan.   It reads like a novel. A sort of PG Wodehouse padded with social history, heart-warming stories and a great deal of tragi-comedy. Couldn’t put it down. And it’s all true. Penrose took over the Heather Jenner Marriage Bureau in 1990s along with extensive archives containing records and descriptions of all the matches they ever arranged, all of which Penrose has woven into her heart-warming account. The accuracy of the detail is utterly convincing as well as totally riveting.

The Marriage Bureau was founded just before the Second World War by Heather Jenner and Mary Oliver, initially to meet the needs of men stationed in the colonies and desperate for a wife. There was a much greater shortage of men then because so many had been killed in the Great War. And at that time a woman was ‘on the shelf’ at 24 if she wasn’t married. The dreary life then of the unmarried daughter without prospects, job or money is unimaginable in today’s world.

At first some people thought the Heather Jenner Bureau was a high class brothel, so novel was the idea of matchmaking as an actual business! They accepted clients from all strata of society: working class shop girls, middle class suburban housewives, intellectuals, minor and not so minor aristocrats, politicians, trapeze artists, farmers, rat-catchers.

Social position was very important then and was usually clearly specified by the Bureau’s clients. Heather and Mary had an incredibly complicated and rather bizarre system for categorising class origin – all described in detail in the book. Nowadays it’s more about education and cultural background. Income and religion came high on their clients’ wish lists too. Interestingly, nationality was frequently specified and indeed after the war Britain was so ghastly that women wanted to emigrate and find a lovely Australian or Canadian so they could live without rationing and maybe in the sun too. There were many men with war wounds and a lot of women were more than prepared to meet them. Divorcees, on the other hand, could only hope to find a partner if they were the ‘non-guilty party’.

Touchingly, there was a desperate flurry of soldiers hoping to marry before they went off to war. They wanted to have someone to fight for, write home to, and of course return to, if they were amongst the lucky ones. During the war, soldiers on leave would often marry after meeting a possible bride for just a few days, and after the war there was the desire to make a home and return to normality again so there were even more clients applying.

It was lucky that the press found the story of two fashionable young women helping lonely singles find love such a delightful antidote to the threat of war and then the experience of life during it and afterwards. The bureau got massive PR coverage in magazines and papers. Articles about Mary and Heather with their advice about dating and mating appeared regularly. This resulted in long queues up the narrow staircase to their tiny Bond Street office. And at times punters even had to wait their turn on the roof.

Here are some requirements of the Bureau’s female clients:

– Broad-minded. Should drink, smoke and be capable of swearing.

– Someone untidy, careless, with a sense of humour, keen on moving around.

Requirements of some male clients:

– Must not chew gum, no dancing or jazz or racing or cards. Not T.T. (presumably teetotal?)

– She must be a plain working class girl.

– A nice stylish girl, not too brainy, with the appearance of a West End mannequin. No objection to a rich widow.

– A good churchwoman preferably with a home of her own within 100 miles of Charing Cross.

– Not lazy or bored, near to Epsom if possible.

– Keenly interested in land work as I am endeavouring to start a small farm.

I loved the frequent glimpses into social history. A world of yesterday. The detail of life in war-torn London. The black market. Rationing. And, more light-heartedly, delightful descriptions of clothing and presentation. For example, the latest ‘bust bodice’, corsets, jaunty hats with lacy face veils, the ‘let-down school gymslip’ worn by the impoverished daughter of mean parents and so on.

And then the feed-back after first dates… Be prepared to laugh out loud and cry by turns. Do read this book which is just begging to be made into a television series. All the ingredients are there.

Click here to listen to Penrose being interviewed on Radio London about Marriages are Made in Bond Street:  http://bbc.in/1PB3ZsK

Click here to listen to Penrose on Woman’s Hour talking about her book with Jenni Murray http://bbc.in/1o5Unjs

Are you ready to meet the love of your life?